Platy Fish: A Complete Guide For Caring And Breeding

Platy fish are a beautiful tropical fish which are colorful and easy-to-keep for beginners. Platies are very easy to care for but also very peaceful in community tanks and because of these qualities the Platy is one of the most popular aquarium fish in the world.

They can live well in small tanks without any problem. Besides, Platies are also good algae eaters which help to keep your aquarium clean effectively. Platyfish is a part of the Poeciliidae family, same with Guppies or Mollies. They originated from the east coast of Central America and southern Mexico. They have a relative elongated body but also somewhat more "stocky" individuals may occur. The dorsal fin is relatively small but there are some strains with a more prolonged "veil" like dorsal fin. They can reach up to 4 cm for mature males and 6 cm for mature females. Most Platies in home aquariums today are the hybrids of two species, the southern (Xiphophorus maculatus) and the variatus Platy (Xiphophorus variatus). They have been interbred for many years in captivity. There are at least 40 different hybrids of the Platy including the popular red, sunset, and tuxedo varieties. Their lifespan is 3 years which is shorter than other fish. Because of their short lifespan, the fish grow up and reproduce very quickly. Only after 4 months from the previous birth, the female are ready to reproduce. And also because of this fact, their population increases very quickly that makes them listed in the invasive species in the wild like to their cousins (Guppies, Mollies and Swordtails). The Platy likes to live in a aquarium with vegetation and lots of space to swim. They prefer lower water temperatures than other species in the Poeciliidae family. A temperature range from 68 to 79°F (20 to 26°C) and medium- hard and slightly alkaline water (pH 7-8) are appreciated.

In planted aquariums, Platies are active at all water levels, they are very peaceful fish and ideal for community tanks with other livebearers such as Guppies, Mollies, Swordtails… The fish will live healthily in aquariums with densely aquatic plants, however, they need some space to swim and play.

They will eat most fish foods available including crustaceans, worms, dried food and plant matter. You can feed them with tropical flakes or pellets as the main remedy and sometimes give them freeze dried or live foods to facilitate happiness and coloration. They also use algae in the aquarium as a source of vegetable foods.

Feed twice a day, give them the amount of food that they can consume within two-three minutes. Any un-eaten food must be removed to not compromise the water quality that in turn causes harm to the fish. Male Platy with a gonopodium

Male and female Platies of a group with the same age are easily distinguished from each other as the males are slightly smaller than the female and also have a gonopodium.

For breeding, keep male and female Platies in the same tank until the females get pregnant. Two to three females per a single male is recommended because the males usually harass the females that may cause stress for them.

They give birth to live fry after a gestation period of four to six weeks. A single female can give birth up to 100 babies, depending on its size. Because the fry are very small and slow, they are very easy to be eaten by other fish in your aquarium. So, if you want to keep the fry, a breeding box or nursery tank should be prepared for the pregnant platy at the time of birth. Baby Platies can also survive in community tanks if there are sufficient amounts of foliage, but a large amount will probably still be eaten by adult fish. 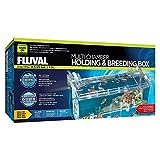 The young Platies swim freely after birth and grow rapidly, reaching maturity at the age of six to eight months. Be careful to choose a proper aquarium filter for the fry tank unless your baby Platies will be stirred into the filter and die.

2 thoughts on “Platy Fish: A Complete Guide For Caring And Breeding”

What Causes Cloudy Aquarium Water And How To Clear?