Guppy: A Complete Guide For Caring And Breeding Guppies are highly prolific livebearers, they are also one of the most popular fish kept by fish hobbyists on the world today. This is largely due to the fact that they are simple to take care of, prolific breeders and striking in appearance.

Guppies come in a wide variety of patterns or strains as well as a multitude of tail shapes. They have been bred for a variety of colors, patterns and fin shapes and are generally named for the color of their tail, tail shape, and body coloration.

Male guppies can have almost any color variations, from red, yellow, blue, black, gold and green. They are much more colorful than the females which are usually a plain color such as gray or brown. Occasionally though, females can have some brighter color variations. Guppies in a community aquarium

Guppies prefer dark graveled tank bottoms and lots of leafy plants that provide them some vegetable foods from algae and are needed to protect the young from being eaten. A female may also retreat to the plants when it's time to give birth.

Guppies prefer a hard water aquarium with the pH in somewhere in the range from 6.8 to 7.4. Kits to test both pH and hardness can be purchased from your local aquarium or pet store. One tablespoon of salt for each five gallons of water should be added if you have very soft water.

The water in which you keep your guppy should be changed about once a week. This involves siphoning about 25% of the water from the tank using a vacuum tube. The vacuum tube allows you to also remove any debris from within the gravel.

Guppies are peaceful fish that can get along with almost any other type of fish. Being a schooling fish, it does best when housed in groups of five or more of the same species. Does best in a planted community tank with no fin nippers. Besides, they should be kept with fish of the same size range, large fish will often eat guppies. Like all fish it is important to feed guppies a varied diet that will actually help in enhancing their colors. As well as standard tropical flakes you should also include freeze dried foods or live fish food such as brine shrimp, brine eggs and worms into their diet. Besides, they are also quite fond of plant matter.

Feed your fish twice a day with small amounts that they can consume in 2-3 minutes. It is important to not overfeed your fish as the uneaten food will rot and effect the quality of your water. If you have young fry a diet high in protein is important, extra protein can be introduced to their diet by boiling an egg yolk and slicing it finely.

Ichthyophthirius: A parasitical disease that appears on the fish body as small white spots. You may notice the fish rubbing up against objects in the tank in an attempt to remove the parasite. There are numerous commercial treatment available for treating Ichthyophthirius.

Fin Rot: Fin rot is a bacterial infection that generally occurs on the guppies large tail fin. The disease is often started when a guppies fins are nipped by another fish, leading to infection. If you are having problems with fin rot try to locate any fish that are nippy and remove them to another tank. Speak to your local fish shop expert to find a commercial treatment for fin rot.

Hemorrhagic Septicemia: A bacterial infection that can be identified by red streaks on the fins of your fish or red dots on the body. This disease is caused by excess levels of nitrate and ammonia in your tanks water, you should perform daily water changes with conditioned to get these levels under control. Fish infected can be treated with an antibacterial solution to reduce the symptoms. For you first attempt at breeding guppies, fish purchased from your local aquarium will be perfectly suitable. As you get more serious or if you are interested in breeding for show then breeding stock can be purchased directly from a specialist breeder.

The male guppy should be your most striking guppy and the specimen you would most like the new offspring to resemble. Females should be compact with a thick tail and brightly colored tail fin. If the fish you have chosen to breed are related the offspring will resemble their parents more than if the fish where not related.

It is best to breed Guppies in at least a 10 gallon fish tank if you don't have the room for a larger tank. Guppies should be kept in water temperatures of 65-68 degrees F (18-20 degrees C) but for a breeding tank the temperature should be increased to 74-78 degrees F (23-25 degrees C).

Leave the base of the tank gravel free and install some floating plants like Java Moss for the newborn fish to hide as mothers often eat their own young. Cover the filter with pantyhose as they can easily suck up the small newborn fish.

If you don't have the space or money for a dedicated breeding tank you can use a floating breeder box. Floating breeder boxes are small plastic containers that you can place in an existing fish tank. They have a V shaped groove at the bottom with a small slot that allows newborn fish to slip into, this prevents the mother fish or any other fish in your tank from eating the young. Once you have established your breeding tank place your selected male fish and 2-3 females in the tank. You are best to put 2-3 females as this will stimulate the male more than having a solitary breeding partner and a selected pair of fish may not always become a compatible mating pair. If you are using a plastic breeder box, do not place the female inside until you are sure she is close to giving birth.

You will be able to tell when a female has become pregnant as the dark spot on the fish belly will become larger and darker in color. This spot is known as the 'gravid spot' and is in fact the eyeballs of the young fry inside the mother. Once you have confirmed that a female is pregnant you should remove the male fish from the tank.

The gestation period for a guppy is about 30 days, the female will generally give birth around 3 weeks after you notice she is pregnant. Each female can give birth to between 20 and 100 young at one time; however, around 30 is more the norm. 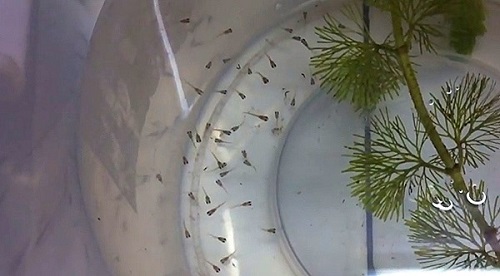 The newborn fish will be looking to feed almost immediately, the best food at this stage of their life is the ground up fish flakes. Once the fish have grown slightly it is good to introduce more nutrition into their diet in the form of newly hatched brine shrimp and small blood worms. A cooked egg yolk finely diced is also a good source of protein for growing fish.

Any fish that don't survive should be removed from the tank as soon as possible to prevent disease. Once your new guppies are around 1-2 months they should be large enough to safely place in the tank with your other fish.