The Red Tail Shark is one of my favorite freshwater aquarium sharks. I don't really have a good reason for this, I really just like the way they look in a well planted aquarium. Something about the sleek looking black body and the red tail make for a really nice contrast in an aquarium with a lot of green. They are fast but smooth and they are not all that difficult to care for.

The ideal habitat for these guys would be an aquarium that is heavily planted and has a lot of hiding spots or shelters. Rock caves, drift wood, and the plants themselves will help make this a happy place for the Red Tail.

It is very important that you only keep one of these fish in an aquarium! They don't get along well with their own species at all and they don't really care to share their territory with any other sharks or catfish either.

As omnivores, your Red Tail Shark is going to need to be fed a variety of meaty and herb type foods. Variety is important but they will accept most anything you feed them. They will most likely enjoy a steady diet of flake food, with some bloodworms and/or brine shrimp once or twice a week. Yet again, we have a "shark" that is actually more of a catfish. Rainbow Sharks are plenty active and tend to be quite territorial, keeping them with other sharks and bottom feeders is most certainly not advised. These fish, much like the Red Tail Shark, make a great addition to the planted aquarium. (Crazy, who would have thought that complimentary colors would make sense with aquarium fish and their habitats?)

This fish is a bottom feeder and spends a good amount of time on the floor of the aquarium but they are active and they will move about all levels of the tank. I strongly recommend that you keep the tank covered as Rainbow's are accomplished jumpers. They spend most of their time on the bottom of the tank and they have barbels near their mouths that can be damaged if your substrate is sharp or jagged. Keep them in an aquarium with a sandy bottom or smooth gravel for that reason.

Being that they are a territorial fish, you will want to make sure that there are plenty of places for your little buddy to hide out. Keeping a good mix of caves or dens as well as plants (real or fake) is a good plan. Also because of their temperament, do not keep these fish with other Rainbow Sharks or other sharks in general. Specifically, do not keep them with Red Tails.

Good tankmates for these fish should be of a similar size and temperament or possibly larger fish that are peaceful, such as silver dollars. The Rainbow Shark will harass peaceful fish in a typical community aquarium relentlessly, so no Neon Tetras or Danios. You might be able to get away with keeping some Tiger Barbs or Odessa Barbs in the same tank but use caution and monitor the aquarium until you are sure that the barbs are not bothering your shark and vise versa.

Though they are omnivores and will accept some meaty foods here and there, such as blood worms or brine shrimp, they almost lean towards the herbivore side. They like flake foods, pellets and sticks just fine but they will LOVE you if you drop some algae tabs in the tank for them once in a while! 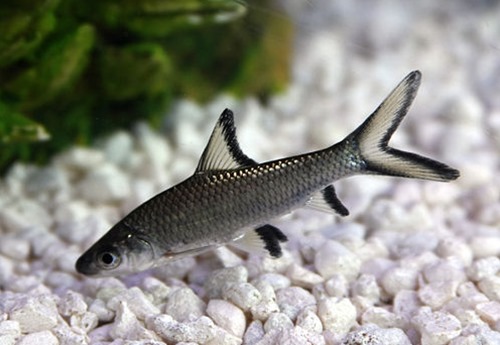 Bala Sharks are great fish pets to keep if you have an aquarium that is large enough to accommodate them. When you are in a pet store looking at juvenile Balas and they look stunning with their shimmering silver coloration, but a full grown Bala Shark can max out at over a foot long! I recommend an aquarium no less than 125 gallons for your Bala buddies.

Although Bala Sharks are not particularly aggressive, they do need a lot of room to swim around. They are certainly an active fish that you will be able to enjoy watching throughout the day.

Technically the Bala Shark is not a shark and is actually pretty peaceful. There are pretty much tankmate options for you to choose what you would like to have.

Feeding these fish is a breeze! They will eat just about anything, flake food, pellets, blood worms, and brine shrimp are some good options. It is a good idea to feed a variety of foods and not stick to just one thing. 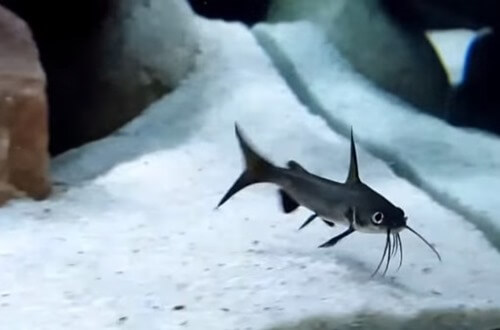 I am only going to go into very brief detail on this shark because I do not advise keeping it for the general freshwater aquarist. The reason being, they are only freshwater aquarium fish as juveniles. As they grow, they slowly become brackish water fish and require higher and higher salinity until they reach adulthood when they are actually a full marine animal. Also, their size will make them unsuitable for most aquarists.

They are very active fish and just like most freshwater sharks, they are catfish. Though they are omnivores these fish tend to prefer a meatier diet than most of the other sharks on this page. In their natural habitat they eat shrimp, small fish, bugs, prawns and more. Pretty much anything living that they can fit in their mouths and won't hurt them.

If you are a freshwater aquarist that doesn't intend to delve into the marine world and you are thinking about keeping a columbian shark, it would probably be best if you start thinking about something else! These are the KING KONG's of freshwater aquarium sharks. Again, they're just catfish and not actually sharks.

Having been found in the wild at over 50" and almost 100 lbs., these guys are MONSTERS! In an aquarium, it is unlikely that they will break the 40" mark. Regardless of whether they grow to 40" or 50", this is a massive pet.

Be sure that you have at least a 100 gallon fish tank to house them when they are young. A mature Iridescent Shark should have an aquarium of 300 gallons or more.

These tanks have an average lifespan of 20 years. It is a bit of a commitment, as they grow bigger and bigger, you will have more and more difficulty in finding a suitable home for your buddy.

Like the Bala sharks, it is easy to mistakenly purchase these fish at your local pet store when they are 3 or 4" long and looking great with those cool black stripes! Unlike the Bala in the sense that it can outgrow them by 4 times!

These cat sharks are unlike most catfish in a couple of ways. They are not bottom swimmers, they are awake during the day and they are very active so they should have a TON of room to swim.
Most catfish are nocturnal and not usually the most active swimmers in the tank, usually hanging out on the floor of the tank.

These massive catfish are actually, gentle giants. They are very peaceful but they will eat any fish that are small enough to fit in their mouths. As they grow, so will your list of fish that fit into its mouth.

Their size obviously means that a lot of fish will fit into their mouths, but there are some good tank mate options. They do very well in schools of 6 or more, as juveniles. As they mature, they will tend to be lone cat-sharks. Here is a list of other possible tankmates.

This is just a handful of fish that you could keep with your Iridescent Shark. Depending on the current size of your shark, a bit of extra caution should be taken with all tankmates.

They are omnivores and will accept a wide variety of foods (and they should be fed a good variety.. switch up the meal plan from time to time). They will love when you give them live feeder fish as treats, frozen and freeze dried meaty foods are good for them as well, though when they get much larger, this won't be ideal. Flakes, pellets, sticks… they won't be picky!