Betta fish originate from stagnant and shallow waters does not mean they can live in poor quality water. Kept in small bowls with nothing to do they often become sick and die very quickly. The truth is that Bettas are one of the easiest fish to care for. They don't need much care and attention, just follow some simple works of looking after them and you will have healthy fish. Selecting a small fish bowl may at first seem a good place for your fish to live, but it actually makes a terrible home for your fish. With no access to freely move around, you should not reasonably expect your fish to live to their full life expectancy. I highly advise you to use an aquarium that holds at least 2.5 gallons of water that will give some space for decorations such as rocks, live plants, plastic items, etc.

Never keep two males in the same tank as they will fight to the death (as the common name suggests, Siamese fighting fish). You can keep more than one female in the same tank. Bettas can be kept with other fish. They only fight with their own species, but you must make sure that you don’t put other aggressive fish in that may nip the Betta's fins. Because Bettas enjoy resting near the water surface to easily gulp air, large leave aquarium plants such as Amazon Sword are good choices for them. Marimo moss balls  are the most popular things you will see at the bottoms of Betta aquariums because these cute plants looks so great in small tanks and only requires minimum conditions to care for.

To put plants in the tank you should put in some gravel but don't forget that gravel gets dirty very quickly and needs to be cleaned regularly.

The best decorations for Betta fish are floating Betta logs and bed leaf hammocks, these things will provide the fish comfortable beds near the water surface to rest and gulp air.

Since Bettas are great jumpers, you should have a canopy or a top to prevent the fish from jumping out of the water and die. Even though Bettas look like normal fish, they are unlike most because they can breathe air the same as humans. It does this by coming to the surface of the water. It is necessary to leave some space (at least 1 to 1.5 inches) between the water line and the neck of the tank so that the Betta has access to the water surface in order to get some air. Make sure that you have holes in your fish tank lid for the good ventilation because Betta needs fresh air to thrive.

The survival temperature range for Bettas is between 72 and 86 °F (22-30 °C) while the optimal range is between 76-82 °F (25-28 °C). A small 25-watt aquarium heater can do well for a small Betta tank under 5 gallons. Keep the tank away from sources that produce extremes of hot and cold, such as near windows, heaters, air conditioners, and vents. Also, be aware that any light fixture can easily overheat a small container.

Betta don't like to live in a turbulent water environment, so it will take you much time to research which is the best filter for Betta fish. The filter you choose for your Betta should be rated for your tank volume and features an adjustable flow rate. If your filter is too strong, you should do something to reduce the current output to make it perfect for your Betta.

Bettas are accustomed to experiencing sunlight in their natural environment. If the room in which the tank sits does not receive natural light, a cheap clip-on LED aquarium light is the best option to provide artificial lighting for a small tank under 10 gallons. The light will not only benefit the Bettas but will also help the nitrification bacteria and plants located inside of the tank.

Change 15-20% of the water once a week is a great way to keep your fish thrive. The water should be treated with a water conditioner to dissipate chlorine compounds and remove heavy metals that are harmful to the fish.

Bettas are highly territorial, and will often fight with other fish that have an appearance similar to them, so it's advisable to keep them separate from each other and other fish. Two males in a tank will result in constant battles; nor do males tolerate females much either, except for short spurts when they're breeding.

The fact that Betta fish can display aggression when, somewhat artificially, kept in very small containers does not mean that they have to be kept alone. In fact, there are a lot of fish species that will quite happily coexist with a Betta. If you don't keep them with fish that have large, colorful fins, or that exhibit aggressive behavior such as fin nipping then a Betta fish would be fairly content to share its home with other species. Corydoras, Mollies, Platies, Plecos, Harlequin Rasboras, Dwarf Rasboras, Swordtails, and Tetras are some of the best tank mates for Betta fish. Betta can also get along well with snails and shrimps.

Fish that are NOT good tank mates for Bettas are ones that are similar to them in color and shape. Gouramis, for one, are too similar to Bettas since they belong to the same family. They too are very territorial and aggressive and will most likely nip the fins of a Betta, perceiving the Betta to be a rival. The same goes for other aggressive fish such as Paradise fish, Tiger and Rosy barbs, Red-Eye and Serpae Tetras, Piranhas, Oscars, and Bluegills.

How to feed a Betta fish? 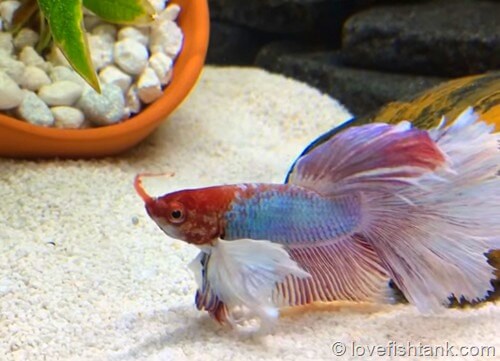 Betta fish are carnivores, a vegetarian diet will not work since it will not give him the protein that he needs and will make him sick. Remember that they have small appetites, so they can be overfed easily. Take care not to feed them more than the amount they can consume in 2-3 minutes.

The best fish foods for Bettas are freeze dried blood worms and dried brine shrimps with their high levels of protein and fat content. Bettas don't like flake food much but will eat it sometimes. Another food they don't like is freeze-dried worm cubes. These Betta fish foods can be got from most pet stores, ask the owner which ones they recommend as they sell many foods that are ideal for Bettas.

You might find that he will occasionally eat mosquitoes or flies that fall into his tank. You may find that your fish grabs his food and swims off to a safe cover to enjoy his find. When eating, fish can feel threatened even if there are no other fish in the tank.

Some Bettas can be finicky eaters. It is ok if your fish does not eat the food you give him that day. This commonly occurs when you first get your fish. It can sometimes take up to a week before they begin to eat. If he still has food left uneaten after 3 minutes, you should remove the leftovers and try again the next day. He won't starve and will eventually start to eat.

Don't be too worried if your fish is not eating every single day because it takes these fish 14 complete days to starve to death. And trying to feed your fish too often will only make the food sink to the bottom of your tank and create issues with nitrate levels.